A bathroom is made up of several zones where there are specific restrictions on what is allowed. There are now 3 zones to bring in line with European standards. 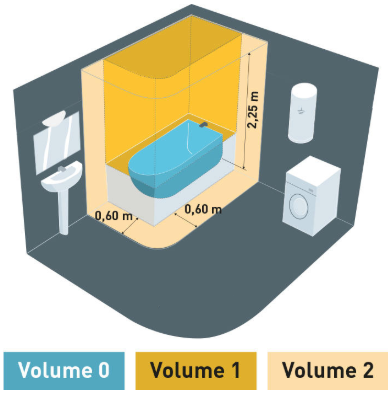 Class I: household appliances, convectors, wall lights; which must be connected to the earthClass II: double-insulation electrical appliances that do not have to be earthed.

The following table shows what is allowed in the different zones

There is also another zone, known as the hidden zone. This is below the bath or shower tray. The only thing allowed in this zone is extra low voltage (12V) equipment such as lighting or radios.